The last stage of the tour was either a long fight against a nasty head wind, followed by 40km of unpaved roads for those who decided to cycle to the temple. For the others it was a 90 minute drive to the New River, followed by a 40km boat ride on the river to the Lamanai temple, at the banks of the New River Lagoon. It

was said, the this river is the only in Belize that flows south to 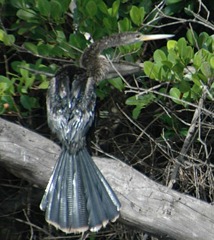 north and is totally fresh water. It was used by the Mayas for trading with their neighbors, as it runs into Mexico. It was a fast ride on the calm waters. Everyone in the boat enjoyed the breeze  of the cooling wind as we moved on through narrow and wider ‘channels’ in the lush vegetation only interrupted when wildlife or notable plants were to be seen. What a difference is a boat ride, compared to cycling

Once we reached the wide lagoon we could make out some humans on top of the roof of the forest, actually on top of a temple. Can you locate them in the photo below?

We arrived at the Lamanai temple site, where we soon reunited with the cyclists. Lamanai is the Mayan name an translates to ‘Submerged Crocodile’, if pronounced correctly: La-ma-na-i, with a focus on the ending i. If pronounced La-ma-nai, it translate the ‘Submerged Mosquito’.